Below are the full weekly ratings results for the entire 1981-82 television season. Viewership wasn't reported by Nielsen until the fall 1988 season, so up until that point the only metric widely available was the household rating (which is what is reported here in this article). To calculate the estimated number of households watching, just multiply each rating by 799,000 (through w/e October 4) or 815,000 (w/e October 11 onward) as that is what 1 rating point represents. The following are newspaper clippings from the Los Angeles Times, which was the only newspaper in the United States to publish full weekly TV ratings results. Full ratings for the week ending Dec. 27 were not available in the LA Times, so full rankings were provided from the Fort Worth Star Telegram and ratings for the top 15 programs were provided from The New York Times (at the bottom of the page). Full ratings were also not available for the week ending Sept. 5, 1982, so the top 20 & bottom 5 ratings are provided from Broadcasting Magazine. Additionally, the LA Times article for the weeks ending Feb. 28, 1982 & Sept. 12, 1982 were extremely faded and hard to read, so transposed versions of the articles are provided. 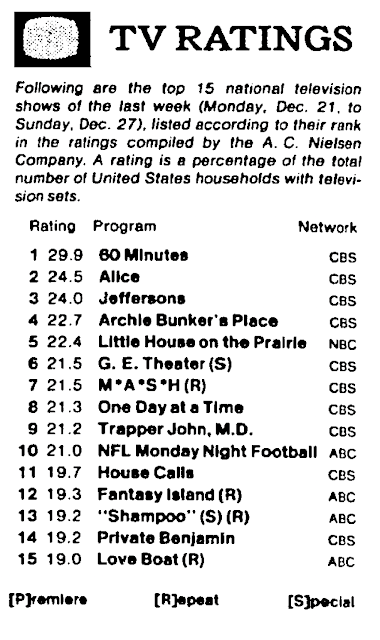 Email ThisBlogThis!Share to TwitterShare to FacebookShare to Pinterest
Labels: 1981-82