AMC's 'Better Call Saul' premiered back in February 2015 with 6.88 million viewers, almost five times higher than the January 2008 premiere of 'Breaking Bad' which only managed 1.41 million viewers. In its first two full seasons (first 20 episodes), 'Saul' remained comfortably ahead of 'Bad', averaging well over 2 million viewers an episode, while 'Bad' was averaging below 1.5 million in its first two seasons (also first 20 episodes). Starting with the third season premiere (episode 21 for both series), the viewership for 'Saul' began averaging less than 2 million viewers - on par with 'Bad's' figures in that same timespan (episodes 21-29), but whether this trend will continue remains to be seen.


'Breaking Bad's' episode 34 happened to be its fourth season premiere, and was also its first episode to average over 2 million viewers (2.58 million). Season two bowed to 1.66 million viewers, and season three bowed to 1.95 million viewers, so this continued the trend of season premiere increases. This was a series on the upswing. 'Better Call Saul', on the other hand, is on its third consecutive season premiere decline, dropping from 6.88 million to 2.57 million to 1.81 million, and to 1.77 million for its fourth season premiere back on Aug. 6. Episode 34 looks to be the beginning of 'Better Call Saul's' future in the shadow of 'Breaking Bad'. After a dominate first two seasons above its predecessor and a neck-to-neck third season, it's difficult to see how 'Saul' can keep pace with 'Bad'.

Following 'Breaking Bad's' episode 34, the series never dropped below 1.55 million viewers, and starting with its fifth season, never again dropped below 2 million viewers. As 'Saul' continues trudging through its fourth season, it seems to be just barely hanging above 1.5 million viewers (1.55M, 1.51M, 1.53M for last 3 episodes), while 'Breaking Bad' was comfortably resting above 1.7 million in its fourth season. 'Saul' is unabashedly a slow burn, but after three-and-a-half years, the once-record-setting audience seems to be losing interest quickly. 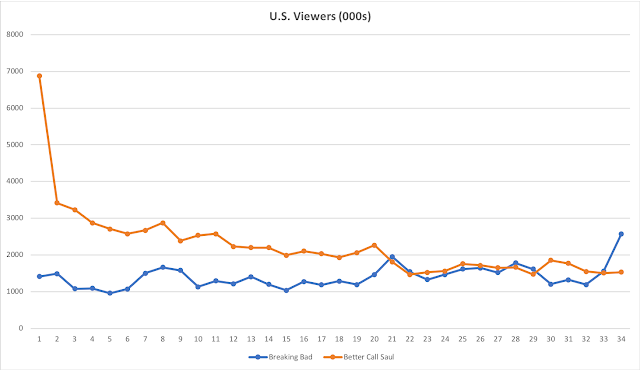